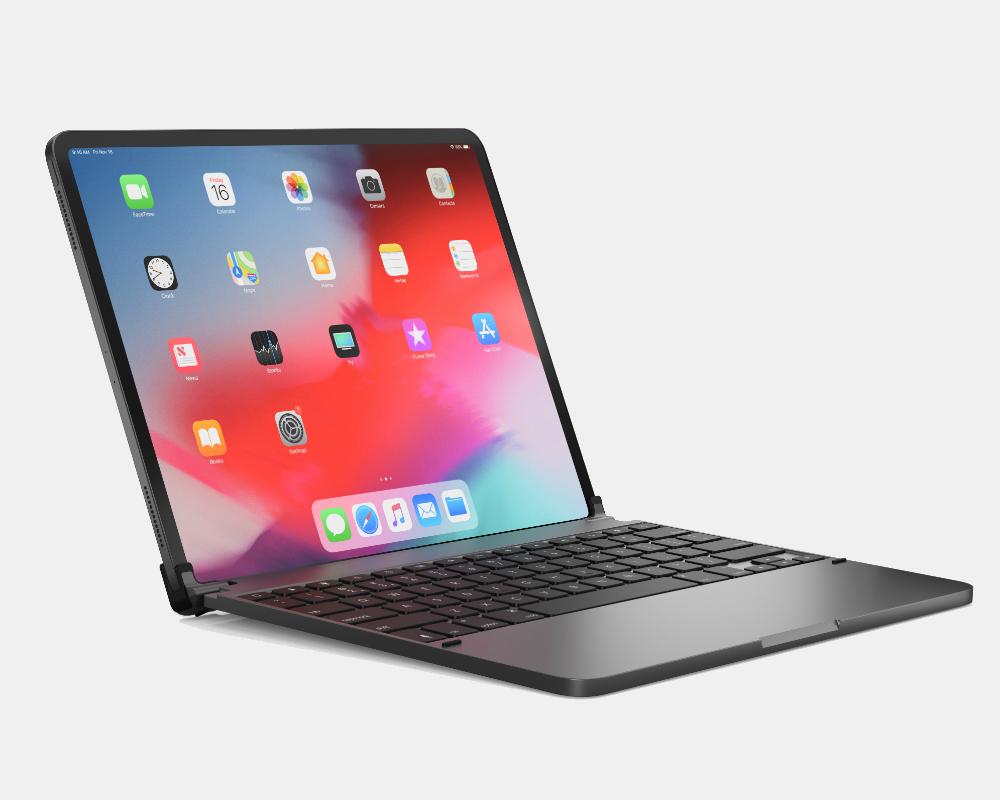 I take my 12.9″ iPad Pro to the office every weekday, where I sneak in writing during lunch breaks. On weekends, some weeknights, and even the occasional work-from-home Thursday it travels to coffee shops and microbreweries around San Francisco Bay. For the past couple of years, when I’ve traveled the iPad has been my sole computer. I may use it more than I use my iMac.

So when Brydge announced they were making their keyboard for the new iPad Pros, I jumped. It’s beloved of (some) heavy iPad users. Mine came at the end of May, and I’ve been using it for over a month now. I absolutely see why people like it.

To my surprise, though, I’m not a convert.

Let me be clear: if you want “laptop running iOS,” there’s a lot to recommend it. Unlike most iPad keyboard solutions, you can set it in your lap. You can adjust the “screen” to any viewing angle. It’s terrific. This is stuff I miss when I just pair the iPad with the Magic Keyboard.

The Brydge keyboard itself is about as thick as the keyboard part of a MacBook Pro. So thin! Well…actually, no. That was the first (literally) big problem. The MBP just has a screen on top of it, but the Brydge has an iPad. The “BrydgeBook” they form together is thicker and weighs more than a 13″ MacBook Pro, let alone a MacBook Air. If you carry this thing around with you, you notice the weight penalty.1

The iPad clips to the Brydge with little rubber clamps that act as hinges. It’s a clever design, but they grip the iPad so tightly it’s difficult to get the iPad out quickly and even harder to get it back in and lined up just so. Maybe I’d get better at this with practice, but I’ve been practicing for over a month. I also worry about the stress this puts on the iPad’s corners and sides; “opening the lid” means gripping one edge of the iPad and lifting it up, rotating the hinges—which take a lot of force to move, as they need to be tight enough to hold the weight of the iPad up at an angle—by using the iPad as a lever.

I don’t want to make it sound like it’s a bad keyboard. It’s not. I just don’t like it as much as the Magic Keyboard, or the older Apple bluetooth keyboard, which has some of the same gumminness, at least when compared to the Magic Keyboard, but less resistance. I don’t even like it as much as the polarizing “butterfly” keyboard (talking just about key feel, mind you, not reliability).

Before getting the Brydge, I thought “If you want a MacBook, just get a MacBook” was a dumb criticism. Now I’m not so sure. A BrydgeBook is the only way to get a laptop that runs iOS (er, iPadOS), and if that alone is enough to get you to buy it, I totally understand! But it’s a bulky, heavy laptop with a so-so keyboard, and opening and closing its “lid” puts stress on your iPad in ways it almost certainly wasn’t designed to handle. If what you truly want is a laptop, and you’re not wedded to iOS, look at the 2019 MacBook Air. If what you truly want is iOS, and you’re not wedded to the specific things you get with a laptop that you don’t with any other iPad keyboard solution, well…think twice about the Brydge.

My previous—and now again current—travel setup is the iPad in the non-keyboard Smart Folio cover and a Magic Keyboard in Waterfield Design’s slip case, toted around in a Tom Bihn café bag. The BrydgeBook is way faster to pull out and start using, and I can use it in my lap rather than needing table space or a lap desk (which I use in the living room). But my iPad retains its essential iPad-ness. I don’t have to take the keyboard out at all. I can leave the keyboard where it is and pick up the iPad instantly. It feels true to the iPad’s intent. And If I bring my Compass Pro, I can stand the iPad up in portrait mode, which turns out to be pretty damn cool for writing sprints.

And I have what I consider to be the best travel keyboard ever made.

I have a Touchtype Pro case on order, which—may or may not be my ideal. I’m not sure yet. It’ll solve some issues with the Brydge for me (giving me my beloved Magic Keyboard) while creating other ones (even more weight). When it arrives, I’ll give it a month, too.

I’m not sure what I’m going to do with my Brydge. While they do have a return policy, it’s not the most generous one out there, and I’m past my own return window anyway. I may come back to it later and give it a second round. If it continues to not stick, I’ll try to sell it; as I noted, a lot of people love it, and my lack of enthusiasm doesn’t mean it might not be perfect for someone else.