Trying to use Firefox everywhere and see how I tolerate it. It doesn’t work as well with GoodLinks as Safari does and I’m not sure I actually like its tab bar, but getting Privacy Badger back is nice.

For better or worse, I am going with the smaller iPad. (I’m fortunate enough to be able to do this kind of tech nerd experimenting for the time being, so I’ll play while I can.)

I’m preparing for the upcoming major changes to Safari’s UI by trying to get more comfortable using Firefox again.

Debating returning to the iPad lifestyle with an 11” model, either the new iPad Pro or the iPad Air—which is cheaper, still pretty good, and more colorful.

It is currently 90°F where I live in Silicon Valley, down from a high today of around 95°. However, I am currently in Discretion Brewing’s beer garden in Soquel, south of Santa Cruz, where it is currently 70°. Hurrah for Pacific ocean breezes! 🍻

If Microsoft Teams’s video chat system was any harder on the CPU, my MacBook Pro would be lifted off the desk by the force of its exhaust fans.

First time I have eaten inside my local gyro place for over a year, and first time in that long I’ve seen it looking like a normal restaurant. (Everyone is, for the record, still wearing masks, including me.)

After a bit of back and forth with myself, cancelling the Tidal subscription I’d maintained in parallel with Apple Music. Tidal is still easier to use with my A/V receiver, but it’s otherwise just not as good a service.

I may make a serious push—of myself—to use BBEdit for coding again, building whatever packages I need to support it. I’d really like to build a BBEdit equivalent to Sublime Text’s Package Control, but I don’t think I’m that ambitious.

Capsule review of Apple’s new Siri Remote: finally, a $60 remote that feels like it’s every inch worth $35

Yes, with an asterisk we’ll come back to. Most surround systems use multiple channels: the original Dolby Surround used four (left, right, center, and rear), then moved to five (splitting the rear into left rear and right rear), and a few Even More Channels variants. Dolby Atmos, though, doesn’t have channels. Instead, it assigns audio tracks to “audio objects,” which have three-axis positions in virtual space. Each object has metadata that says, “this object should sound like it’s coming from a point this far between the left and right walls, this far between the rear and front walls, and this far between the floor and ceiling.” When you play the Atmos soundtrack, the decoder—called a “renderer” by Dolby—knows how many speakers it has available in the room and their positions within 3-D space, and it maps the audio objects onto specific speakers at specific values. It’s remixing the audio to match the playback environment on the fly, with as high fidelity to the original audio object positions as possible.

That’s pretty cool! What about, uh, not movie theaters?

The home version of Atmos works essentially the same way, just mapping to fewer speakers—typically just five, although you can get fancy and go up to eleven.

Is that a Spinal Tap reference?

So how do you get all that fancy three-dimensional positioning with only two speakers, or a pair of headphones?

Congratulations, you’ve found that asterisk I said I was going to come back to!

For headphones or any other two-channel system, Atmos positional data has to be down-mixed into two-channel audio. If you want to hear Atmos music with the highest fidelity to the recording, you’re going to need to play it over a system with at least four physical speakers. As far as I know, the only way to do that with Apple Music is to use an Apple TV box: it outputs Dolby Atmos over HDMI.

Well, not so fast. What Dolby Atmos does for Headphones is render binaural audio. Binaural audio is, per Wikipedia, “a method of recording sound that uses two microphones arranged with the intent to create a 3-D stereo sound sensation for the listener of actually being in the room with the performers or instruments.” Basically, the theory is that we only have two ears, yet we can clearly hear when sounds are up, down, front, or back, not just left or right. In theory, two channels should be enough to capture full positional information if we record the sound properly.

So: when there’s only two speakers to output to, the Atmos renderer takes each Atmos audio object and calculating volume and left/right panning settings to synthesize a binaural mix. All the positional information is still used.

Is it better stereo, or just different?

That’s hard to answer. First off, you may not hear much difference between binaural stereo and normal stereo. I hear what audio nerds call a “wider soundstage,” but I rarely think sounds are in front of me or behind me. Occasionally, I get that “enveloping sound” sensation they talk about, but I can also get that from a good normal stereo recording. In my experience, I’m more likely to get it from a pair of great full-range speakers than from headphones. From what I’ve read, I’m not an outlier here; the truth is that most people just don’t have great speakers.

That’s very audiophile snob of you.

You said “first off.” Second?

Second, the original multichannel Atmos mix just might not be as good, at least subjectively, as the stereo mix. Tracks are definitionally going to be placed differently, and you might find some are overemphasized or underemphasized to your tastes. This gets even more complicated if you’re listening to headphones, because you’re relying on the Atmos renderer to synthesize the binaural mix.

So is this an Apple exclusive thing? Apple talks about it like they’re doing amazing things nobody else has.

Huh. So what does any of this have to do with AirPods “Spatial Audio”?

Apple seems to be using that to describe two unrelated things:

But, an Apple tech note says it’s coming “this fall,” which seems to mean “with iOS 15.” A friend with the developer beta says it’s already working in that release, and that when she turns her head she can sense the instruments “moving” on the soundstage. This suggests the Atmos binaural rendering is being reconfigured on the fly by dynamic head positioning.

Yes. If you’re using an Apple TV box, then It Just Works™. Otherwise, you’ll need to go into the Music app’s settings and set Atmos to “Always On” rather than “Automatic.” Apple Music warns that isn’t “supported” on all speakers, but I would read that as a warning that it may not sound good on all external speakers—remember, the Atmos binaural rendering happens in Apple Music itself. It should be fine on any decent headphones, though.

So is this really the future of music?

If anyone can finally make multichannel audio mainstream, it’s Apple, but that’s a big if—the consumer audio market has been rejecting multichannel audio for going on five decades. We’re going to have to wait a few years to see if “3-D music” really takes off, or if it goes the way of 3-D movies.

If “Spatial Audio” Apple Music sounds better to you on headphones, kudos—but it really shines if you have an actual surround speaker setup with Dolby Atmos support. (Even if it’s like the fifth or sixth time we’ve tried to re-invent quadrophonic.)

So what’s the deal?

Have you gone through scientifically sound ABX testing, ideally in a soundproofed room and conducted by qualified audio engineers?

I sense you are not interested in this argument.

Okay, so let’s talk about Apple Music specifically. Can I get lossless quality over any Apple AirPod?

No. There are no lossless Bluetooth codecs.

How about the HomePod?

Not yet, but it’s promised for later.

Yes, but not at hi-res, and it appears to be locked at a 48 KHz sample rate. (Some lossless music Apple has is likely at a 44.1 KHz sample rate, the same as CDs.)

Okay, so it’s best on the Mac.

The music files have sample rates they’re encoded with, and your computer sends data to either its internal or your external DAC at a specific sample rate. Ideally, those two rates should be the same, and most “audiophile” music players match them automatically. Apple Music on the Mac doesn’t. It uses whatever bit rate the output device happens to be set at when the Music app launches. If that bit rate doesn’t match the music it’s playing, the music will be resampled to match the output rate.

If it’s resampled, is it still lossless?

How do I fix that?

A few approaches off the top of my head:

Wait, are you saying that iOS does do sample rate switching?

Why doesn’t the Mac?

The Music app on the Mac is really still just iTunes. Internally, iTunes is, if you will forgive the technical jargon, a trash fire.

You mentioned TIDAL. Does it do sample rate switching on the Mac?

Yes. As much as TIDAL gets made fun of, it’s got a decent app, and TIDAL Connect, like Spotify Connect, is arguably better than Apple’s AirPlay for getting home audio devices to stream music. But its lossless tier is $20 a month and its radio stations and curated playlists are noticeably worse than Apple Music’s.

What about Spotify and Amazon HD Music?

I don’t know. Like Apple Music, though, they’re more “consumer-oriented.”

So what are you personally doing?

For my desktop, I’m following #2 above. My computer speakers (Vanatoo Transparent One Encores) have a USB DAC built into them. For my living room system, I can use the Apple TV, but compared to Spotify or TIDAL Connect—both of which work natively on my A/V receiver—it’s a little fiddly.

I read on a website that the best music quality possible is from MQA, “Master Quality Authenticated,” files. Does Apple Music support that?

The Music app, at least on the Mac, has never actually changed the output sample rate to match the rate of whatever it’s playing, even if it’s playing an ostensibly hi-res file. I figured they’d fix this now that Apple Music can stream lossless music. Surprise! They have not.

Can we just shorten “Xcode Cloud” to ‘Xcloud”?

Starting a new project in PHP in 2021 feels willfully contrarian, but I think that’s part of the temptation.

Years ago, I bought a cast iron skillet on Kickstarter, and after years of trying to get a non-blotchy seasoning to stick on it—and now finding myself trying to re-season yet again—I think what I’ve learned is: Lodge is actually pretty good stuff.

Fast food restaurants in California are opening for dine-in again. Nature is healing.

Occasionally I bumble into a TV show that’s way better than it has any reason to be. This year’s, at least so far, is HBO Max’s “Hacks.” 📺

It seemed like iTunes/Music was de-emphasizing star ratings for songs over the last few years, but the (Mac) Music app seems to be showing them prominently for albums/tracks again, even on Apple Music playlists. Is this new? I don’t remember changing any settings…

It’s interesting—and disconcerting—seeing which places around Sacramento are following the (still in effect!) mask mandates and which ones are blowing it off. We’ll just say I’m making sure I’m very extremely socially distanced at the brewery I’m at right now.

Been a while since I’ve had a cocktail outside my apartment, and this Old Fashioned looks promising. 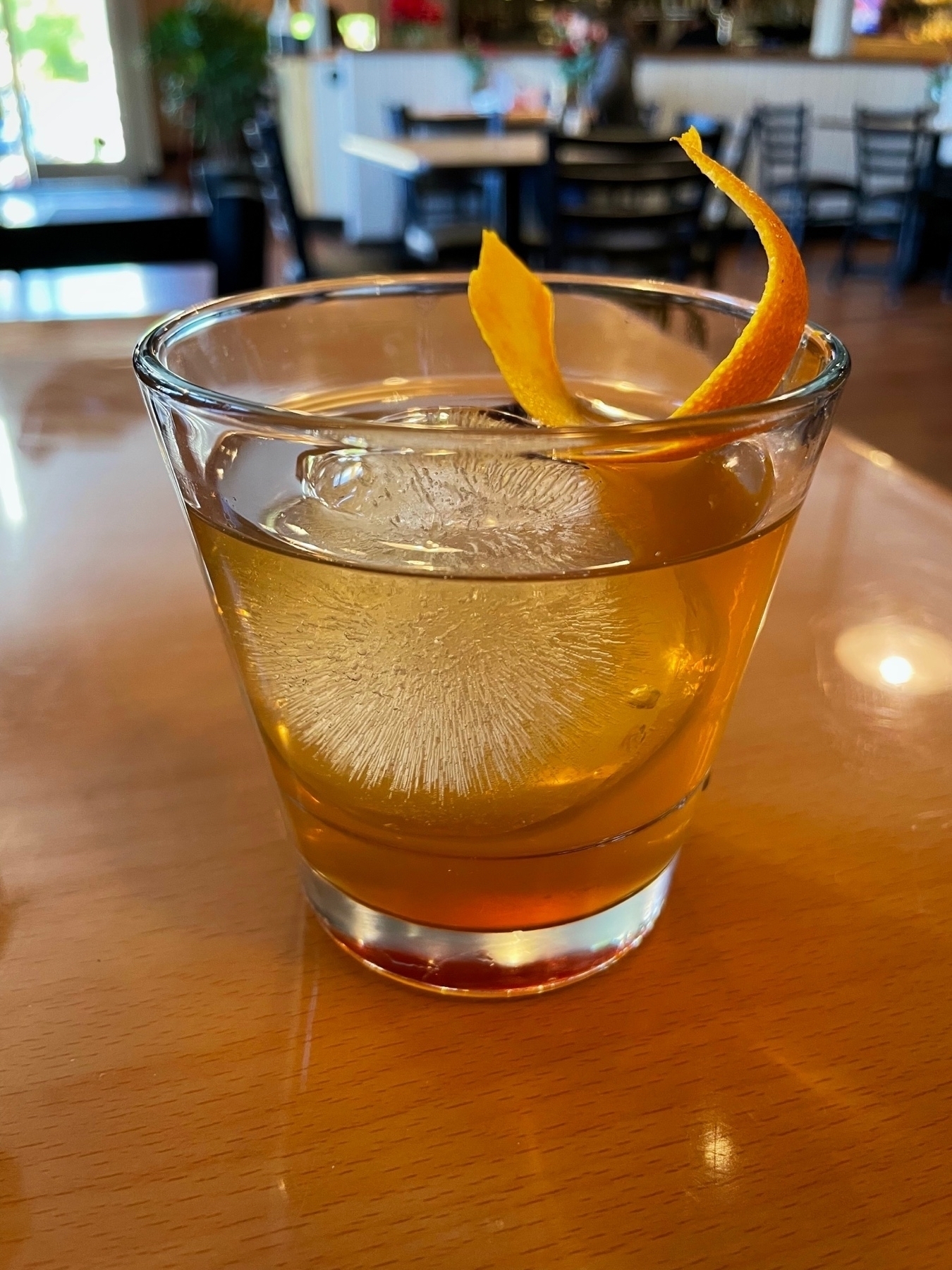 Sometimes I want to write more about “mid-fi” audio stuff, which I define thusly: both your audiophile and non-audiophile friends exclaim shock at how much your stereo costs, but for opposite reasons.